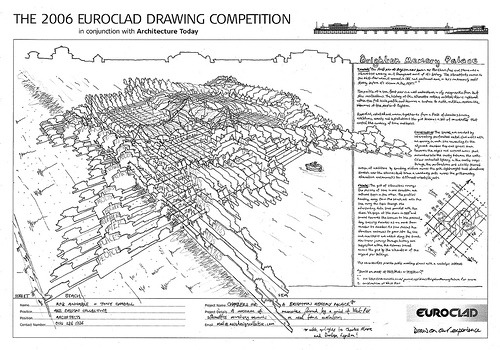 We’re delighted to report that our entry for the Euroclad competition has been awarded a commendation. This was the last collaboration between Tony and Rob before Tony’s untimely death, so it seems particularly fitting that it might achieve an award.

Rob will be in London attending the awards ceremony on October 19th.

Here’s our entry to the Euroclad drawing competition, which asked entrants to ‘sketch a fresh look for Brighton’s West Pier’.

Chambers for a Brighton Memory Palace Concept: “The first pier at Brighton was known as The Chain Pier, and there was a silhouettist working on it throughout most of it’s history. The slhouettists moved to the West Pier when it opened in 1866, and continued more or less continuously until shortly before it’s closure in the 1970’s.”1

The profile of a sea front pier is a well understood, easily recognisable form that stirs recollections. The history of the silhouette cutters on West Pier is captured within the full scale profile and becomes a surface to incite and then receive the memories of the people of Brighton.

Repeated, rotated and woven together to form a field of chambers housing exhibitions, events and installations; the grid becomes a set of co-ordinates that control the curating of time and topics.

Construction: The spaces are created by intersecting, perforated metal clad walls with an opening in each side connecting to the adjacent chamber. Exposed spaces drain towards the edges and covered areas shed rainwater into the cavity between the walls. Colour controlled lighting in the cavity seeps through the perforations and assists themed curation of exhibitions by directing visitors across the grid. Lightweight tent structures stretch over the volumes that trace a wandering path across the grid providing alternative environments for different events/objects.

Curate: The grid of silhouettes conveys the passing of time in one direction and cultural topic in the other. The profiles heading away from the beach out onto the sea carry the topic through the intersecting date lines parallel with the shore. We begin at the shore in 18652 and travel towards the horizon to the present day, crossing decades as we move from chamber to chamber. As time passes the structure continues to grow into the sea and new topics are added along the beach. Non-linear journeys through history are suggested within the volumes traced across the grid by the silhouettes of the original pier buildings.

The co-ordinates provide public meeting places with a nostalgic subtext.

With apologies to Charles Moore and Donlyn Lyndon for the Chambers for a Memory Palace rip off. The drawing is also available as a PDF.

notes:
1. from ‘The Silhouette Tradition of Brighton Pier’ by Edo Barn.
2. the year the West Pier was constructed